Shout, Sister, Shout! tells the story of “Sister” Rosetta Tharpe, a vocalist and guitarist of the Sanctified church and one of the most remarkable-yet largely forgotten-musicians of the twentieth century. Beginning in the 1930s, she commenced a colorful career as gospel’s original crossover artist, its first national superstar, and the most thrilling and celebrated guitarist of the music’s Golden Age.

Drawing on interviews with more than 100 people who knew Rosetta Tharpe, Shout, Sister, Shout! narrates her unlikely rise to fame: from traveling evangelist on the revival circuit to star attraction at the Cotton Club, from gospel celebrity in the 1940s to idol of the European blues revival in the 1960s.

An iconoclastic and electrifying performer, Rosetta Tharpe influenced scores of musicians, from Little Richard and Ruth Brown to Elvis Presley, Johnny Cash, and Isaac Hayes. Her story illustrates the centrality of the Pentecostal church-especially its “underneath-it-all” women-to “rock and roll” sound and style.

“Sister Rosetta Tharpe was anything but ordinary and plain; she was a big, good-looking woman and divine, not to mention sublime and splendid. She was a powerful force of nature –a guitar-playing, singing evangelist.” 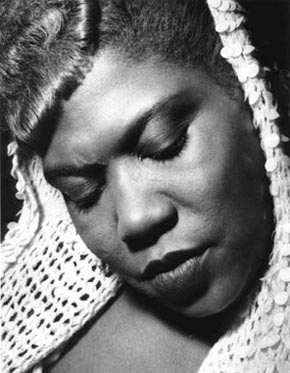